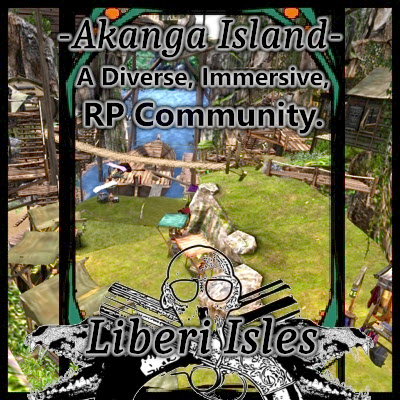 I was checking Pixel delivery orders the other day to see who had recently ordered truckloads of pixels.  This can be evidence of heavy construction going on, and I hit Paydirt...or rather.. “PayPixels”  As it turned out, there was some MAJOR construction going on at Akanga Island, the grid’s newest Role Play build.  There I met Renita (Jacquotte Anne de Graaf) and Clawtooth (M/Roach Aker), taking a short break from the day’s labors.  Fascinated by what I saw, I KNEW that this would be something for RPers everywhere.

Josh (Thomas1 Belic) JB:    So tell me, Renita.  Just what is Akanga Island Liberi Isles all about?

(Renita) Akanga Island:Liberi Isles is the RP brain child of my friend Clawtooth Aker and myself that is set in the 18th Century and based off of both fiction and nonfiction histories of Madagascar during that era. Akanga Island:Liberi Isles is fictionally located off the coast and lost in time which is where the multi-verse RP comes in. The Lore has a fantasy flair to it which incorporates both fact and fiction all in one so that the player can either develop within the created storyline or create their own.

We started this RP back in 2010 and decided to rekindle it with a vaster storyline that inter-fuses everything from Libertalia pirate history to the cannibalistic tribesman in the dense jungles and then everything in between.

We wanted an exciting and diverse place to play and have fun that is built for players by players. 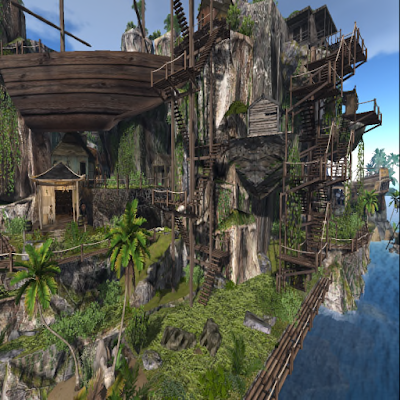 JB:    What a phenomenal build.  Did you do this all yourself, of did you have help, and what did they do?

(Renita) I am glad you enjoyed it. Feels like it took forever! I did the build myself yes. I started this particular build back in early 2021 after Claw and I decided to make a go at reopening this RP after 10 years. I wanted the build to be very realistic but allow for players to add their own flare to it. It was challenging to say the least. There were a lot of cuss words. Let's just leave it at that.

JB:    Where did you get the inspiration for this build?

(Renita) The history of the Libertalia is what started it 10 years ago and so this time around I painstakingly researched Madagascar regarding their landscapes, wildlife, fauna, insects, even their people and villages that were around at that time. It was important to me to make sure that it was done correctly. There is nothing I hate more than to walk onto a sim, see primmy builds with textures sloppily slapped on and objects, wildlife or even trees that were never even in that timeline or location. Unless it is all fantasy, it just doesn't make sense. Make it make sense and that's what I did.

(Clawtooth) While Ren took the visuals angle for our game design, I focused mostly on the mechanics of RP and interactions. I come from a very game-centric background, Role Playing to some degree is a large part of my experience. I wanted to make sure there was a baseline created so that everyone was playing on a fair, interactive game field, regardless of the style of play that was chosen. 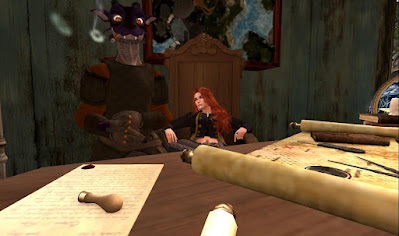 JB:    What can we hope to discover in Pirates Cove?

(Renita) So many secrets to be told!! Can't give away too much but there is quite a lot of fun to be had in the Liberi Cove. I wanted it to look like a hybrid of Pirates Cove and the Pirates of the Caribbean shipwreck island. We have everything from the quack doctor to a historian and even a greedy trader's office. We have a ton of housing available with some really cool ones, some even on cliffs,  and of course, the ability for people to live on their ship if they like. Wow, there is so much,... the marketplace, the taverns, the faction headquarters, the blacksmith, the carpenter and so much more to do just in that cove for sure.

(Clawtooth) The Cove is more or less the heart of the Liberi, it serves as the main bridge between the land and sea folk. In a way, because the sim low key touches on the idea of the Multi-verse, it's also a cultural stew pot, exposing characters from various settings to one another to create something new. 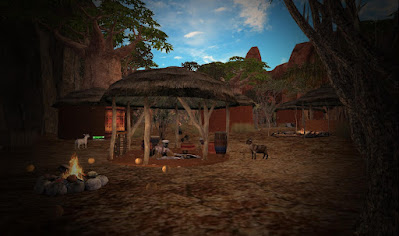 JB:    How about the Desert Build?  What is THAT all about?

(Renita) Ahh, the desert, isn't that magnificent? So if you take a look at Madagascar it has a number of landscapes and climates all on that one island. You have jaggy rocks, desert landscapes, dense tropical jungles, and mini islands off it called isles that can be habitable. With that in mind, we created a desert landscape on Akanga Island. On the one side of the desert, you have the dwellers and these are common folk who are on the mainland and have found community in that area. They have a marketplace, a tavern, housing and so much more. Now on the other side of that desert are the Bari people and they are the desert tribesman who raises cattle and live peacefully as long as they are not provoked. They trade spices, chickens, and pottery and live in a very highly patriarchal tribe where polygamy is practiced among them. The Bari have their own secrets. Everyone does...we love secrets.

JB:    Are these areas built for free-play, or is there an existing storyline for each area?

(Renita) We encourage both! We love when the players develop their own storylines and incorporate it into either the existing lore or start their own. We are an immersive RP sim and most of our players do para or semi para RP. Claw masterminded the HUD system and it is optional, but it's great to complete your character.. You can build, earn in-game funds to trade, and so much more.

(Clawtooth) Bottom Line, we wanted to create a choice for everything... immerse yourself in what exists, or forge ahead into the future and make something new. Rome wasn't built in a day, nor did it last for nearly a thousand years by focusing on what was. We want the players to take what we made, and make it their own. 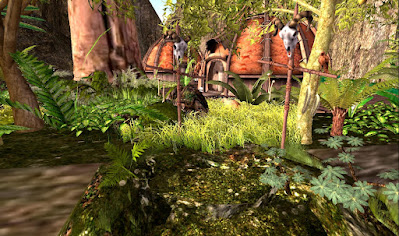 JB:    I imagine the Jungle Build can give way to all kinds of RP scenarios.  How do you see that playing out?

(Renita) I had fun on this build and really wanted people to get lost in there and I think I accomplished that because I get lost all the time (laughs). The Dayuks were a challenge though, they really are a pivotal part of the Lore and I wanted to make sure their area really represented the danger, mystery, and magical powers behind this important tribe.

(Clawtooth) It's dense, crawling with critters, like Ren said it is easy to get lost in. Any number of scenarios can play out here, it really depends on the player, anything from the simple harvesting of resources, to raids, or even a simple walk through the jungle. Make a farm, explore Lore. If the Cove is the center of culture and knowledge, the Jungle is definitely the seat of the unknown.

JB:    Do you plan any special events here, and if so, how might people learn about them?

(Clawtooth) We have a few event types planned, which can all be found in the Active Stories section of our Website. Active Stories represent a sort of timeline for events that stand out over the course of story progression, as time goes on and more events take place, a more formalized format will be adopted. Some events may never end and typically rely, to some degree, on the HUD/Meter system to operate while others may simply take you to a point of interest to find an object or present you with a clue. 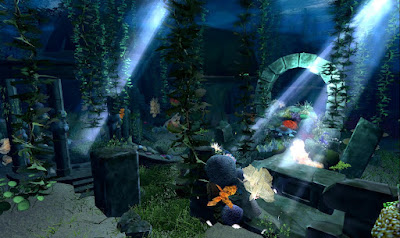 (Clawtooth) Akanga/Liberi Isles is in OpenAlpha stage Development. We fully expect players to take what we've created and run with it, that is, we want them to break the status quo, and make it their own. We have created a place rich in history and lore... and a flexible, interactive HUD system so players can represent their characters. This includes a crafting system that allows players the freedom to customize their own RP experiences. While we have plans that expand into the distant future, we have come to a point in development where growing and making everything even better only comes with community-driven play and support. Want to get in on the RP? We got you. Don't have $Ls? You don't need them to progress and RP. Got ideas for the game systems? We have ears and the skills to make it happen. Want to be a part of something big? What you see on sim is only a fraction of the plans we have for Akanga Island: Liberi Isles.

So.  There you have it folks.  For the finest in RP sims, drop on by Akanga Islands.  Stay an hour…or stay a lifetime…or anything in-between.  You’ll be glad you did.