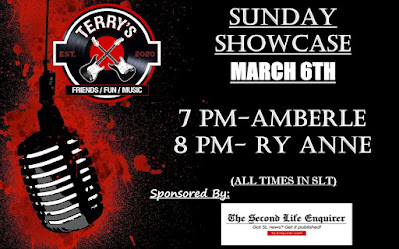 Join us on Sunday, March 6th beginning at 7 pm SLT for a special evening edition of Terry's Sunday Showcase, sponsored by the SL Enquirer!  This week's featured artist is none other than Amberle Janniah!!  A singer/songwriter/musician from the Philippines, Amberle grew up with several influences that are rooted deep within: her family's deep ties to structured church music combined with her mom's pop/power ballad techniques and her dad's more playful rock/jazz approach to performances.

Amberle knew from early on that music was one of the things that would always make sense, so each and every melody sung from her formative years to the present would impact her song choices that span from the 80's to the present (and a few handpicked original songs thrown in the mix). Intent on initially focusing on acoustic performances, she has added tracks to her arsenal, choosing to lean into a wider array of sounds and styles to convey a wider range of emotions and topics.

With her ever growing enthusiasm for guitar, vocals and deft arrangements, Amberle will give you a deeper sense of a raw, stripped down musical experience.

Next up at 8 pm SLT, Terry's Sunday Showcase continues with the amazing Ry Anne, an American singer born in Southern California. From the moment she was able to speak she began her passion to sing and has been singing ever since.

Ry Anne joined a choir at the age of 8 and entered several competitions throughout her life. People that influence her are the Beatles, Céline Dion, Whitney Houston, Christina Aguilera, just to name just a few.  After coming to Secondlife a few years ago, Ry Anne has decided to get involved with the live music community....trust us you won't be disappointed with the results!

Her voice ranges in styles from soothing ballads to rock and upbeat pop to folk.

__________________________
Terry's Place, a hybrid live music venue and friendly neighborhood club where everyone knows your name! Now in its second year as well as home to some of the hottest DJ's and live performers/musicians on the grid, there's a little something for everyone at Terry's when you just need to get away from it all. Dance as we spin tunes for all walks of life, show off your talents at Open Mic every Friday, or enjoy a live concert out in the park at Terry's Sunday Showcase!  With events now happening four nights a week, be yourself and escape the chains of real life with friends, great music and a whole lot of fun...ONLY at Terry's Place!