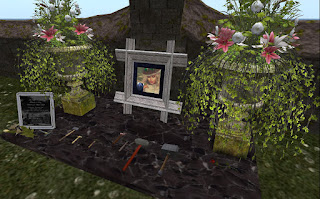 Some days ago, word was passed to the Caledon group that Breezy Carver had passed away.

We've received news that Breezy Carver has passed. If you would like to pay your respects, there is a place in the gardens she built. There will be a formal memorial organized at a later date.

Hello everyone, I have some bad news and I'm sure many of you know or know of Breezy Carver as she was a HUGE blogger of all things Fantasy and Streampunk and Lived for FF each year as she did this year! She passed on May 3. She was quite sick but it was unexpected. Her funeral was June 4th. She will be greatly missed 😦

Talking to Oldesoul Eldemar, he would show a picture of the New Babbage camp at the Relay Weekend track of 2009, taken by Wildstar Beaumont, "she was a former captain of the New Babbage team. She was a wonderful blogger, a fantastic builder."

Olde would show an episode of Designing Worlds that featured Piermont Landings and Breezy Carver (https://vimeo.com/510126220), as well as a cartoon that was made of footage of the video (https://www.dropbox.com/s/2ibmqrl5w38s3z2/Purloined%20Diamonds.pdf).