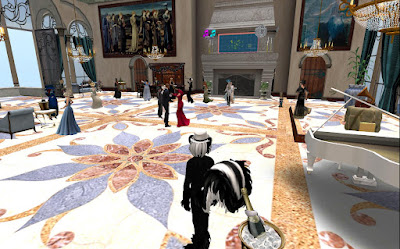 Sunday June 12 at the CDS was the Inaugural Ball, their party to celebrate a new term of their government. The event was held at the Schloss Ballroom in the Neufreistadt sim from Noon to 2 PM.

You are invited to the CDS Inaugural Ball for the 37th Term!

Join  in the beautiful Neufreistadt Schloss Ballroom to celebrate with the newly elected CDS Government Members and to celebrate our move to VWEC Eduverse.

The theme of the event was "La Belle Epoque," described as "The era spanning years between the end of the Franco-Prussian War and the Beginning of Word War One." DJ Calli provided the music.

The CDS has been active lately. With Tor Karlsvalt as their current Chancellor, they have been in the process of having their community's land moved closer to VWEC Eduverse and other science sims. They also have an exhibit at the Second Life Birthday celebration, at SLB Amaze (164/63/23).

Art at the Airport in Second Life