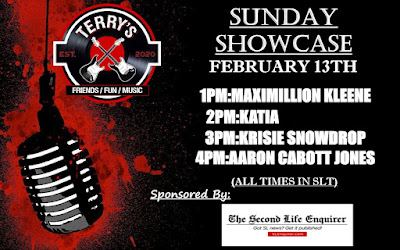 Join us on Sunday, February 13th beginning at 1 pm SLT for Terry's Sunday Showcase, sponsored by the SL Enquirer!  This week's featured artist is Maximillion Kleene, recipient of over 11 Avi-Choice Awards in multiple categories including Favorite Male Performer, who has been amazing his audiences since 2007.

Streaming from Niagara Falls Canada, Max provides his fans with an hour of musical magic and brings a vast repertoire of quirky, classic, and current covers to Second Life.

Next up  at 2 pm SLT, Terry's Sunday Showcase continues with a special LIVE performance from Katia! Her wide range of styles coupled with an upbeat stage presence and her infectious laugh has drawn a large fan-base.

Katia hails from Croatia, and is currently living in Lisbon, Portugal. She first entered the SL music scene in 2009, but took a break and re-entered in 2013. Katia has been performing on various online platforms for over 15 years, specializing in modern and classic rock, show tunes, ballads, pop music and a wide variety of genres. Katia speaks 5 languages and during each set enjoys singing a song or two in Italian, Portuguese and Spanish.

Katia has a blast when she is performing. Her sense of humor is very contagious and spreads to her audience. You owe it to yourself to attend one of her shows to hear what all the hype is about!

Following Katia at 3pm SLT, Terry's Sunday Showcase proudly welcomes Krisie Snowdrop, a singer/songwriter from Canada whose bubbly and vivacious personality has endeared her to so many across the SL grid.  Armed with the sweetest giggle, which she does quite a lot, as well as a slightly warped sense of humor, she performs Country, standards, Pop, Rock, love songs, oldies and much more!

Debuting at Terry's this week, Krisie may be no rock or country star, and may never travel the real world or ride in a limo, but she is truly honored to have the opportunity to sing for all as her family and fans.

Of course, Aaron's original material is what is closest to his heart. He's full of energy and rocks to classic rock and blues. You will leave with a smile, wanting more...GUARANTEED!

Terry's Place, is a hybrid live music venue and friendly neighborhood club where everyone knows your name! Now in its second year as well as home to some of the hottest DJ's and live performers/musicians on the grid, there's a little something for everyone at Terry's when you just need to get away from it all. Dance as we spin tunes for all walks of life, show off your talents at Open Mic every Friday, or enjoy a live concert out in the park at Terry's Sunday Showcase!  With events now happening four nights a week, be yourself and escape the chains of real-life with friends, great music, and a whole lot of fun...ONLY at Terry's Place!