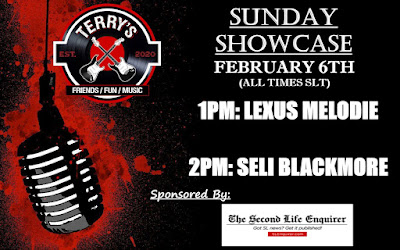 Join us on Sunday, February 6th beginning at 1 pm SLT for Terry's Sunday Showcase, sponsored by the SL Enquirer!  This week's featured artist is Lexus Melodie!

Debuting at Terry's this week, Lexus is a singer/songwriter with the voice to prove it. With a heart as big as her voice,  Lexus' setlists are a carefully crafted blend of songs that she connects with or has written based on her life experiences in the UK.  Her originals have depth, but also just the right amount of humor, wit, and catchiness.

When playing covers, she has the innate ability to take songs created by others, and play them in a way that transforms them into something different, something audibly noteworthy, something.....Lexus.  Come see which songs you'll still be singing tomorrow morning...

Following Lexus at 2 pm SLT, you're in for a treat as Terry's Sunday Showcase continues with a special LIVE performance from the lovely Seli Blackmore, a singer/songwriter that continues to impress with her silky smooth voice, pure sweet tone and vivacious personality that will have you humming to yourself with a big smile on your face.  She not only performs original songs but covers greats like Fleetwood Mac, Billie Holiday, The Dixie Chicks and even some Aerosmith!

Not only is Seli an accomplished singer/songwriter, her voiceover work for radio and television is heard on a regular basis throughout the Nordic region.

Seli was born in the USA but calls Sweden home.  She's currently involved in a number of projects in addition to her own debut solo album. After over a decade in SL, she combines the two things she loves: gaming and music. Her distinctive voice makes her a "must-hear performer" and you won't regret spending your time listening to her mesmerizing music.