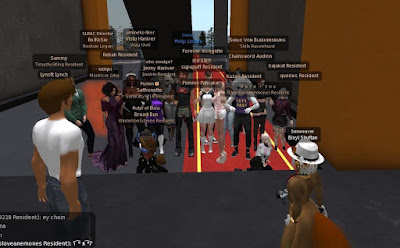 Just after the premiere showing of Draxtor Despres' "Virtual Cultures in Pandemic Times" at Film Threat, only a few minutes after Draxtor himself logged off for the night, a very famous Linden dropped by: Philip Linden, the founder of Linden Labs, and thus Second Life. Today, Philip's position is basically an advisory role. But he's still very popular among the residents. 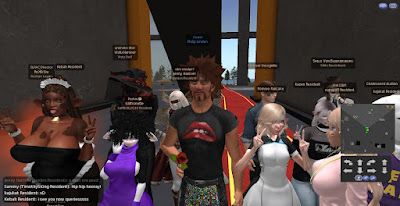 Philip had hoped to catch some of the film. But even Lindens can be late for shows. In any event, he was soon surrounded by admirers. He was happy to see the crowd, complementing people on their avatar designs, saying much had been accomplished over the years. He himself was still in his old prim hair, facial hair, codpiece, and "Rocky Horror" t-shirt. So it was a happy contrast of classic, mesh, fitted mesh, and bakes-on mesh.