Looking Back: The Redzone Controversy 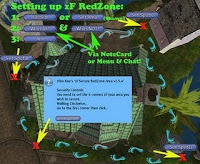 Imagine this. You've had to deal with a stalker who just won't leave you alone. So you decide to use an alt for a few weeks or so, maybe longer, until the heat is off. Only a few trusted friends at most know it's you, so you feel safe. Then you hear the store you've been going to now has an "alt-detector," part of a service that stores information about accounts and the Internet Provider data on a database. You also hear stories about the service, that it's prone to being hacked and the information leaked. And you hear that the owner has a chip on his shoulder and puts anyone he so much as suspects spoke out against him on the security database as if they were griefers. And then a friend suggests the stalker after you could find your real-life address using your IP address if they had a hacker steal it from Redzone. Sound crazy? Well, this is what some were worried about eleven years ago during the Redzone controversy, and it was the first couple days of March 2011 that Linden Lab finally acted. So how did it end?

Read the article in Extra.