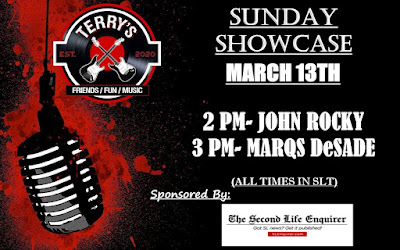 Join us on Sunday, March 13th beginning at 2 pm SLT for Terry's Sunday Showcase, sponsored by the SL Enquirer!  This week's featured artist is John Rocky!!

Performing his debut at Terry's this week, John brings Second Life his wealth of real-life experience. His shows are in English and have often been described as being "beautiful," "groovy," "retro to modern," "heart-touching," and "rocking." Each show can featuring pop, rock, hard rock, metal, 80's, 90's, and even some classic rock ballads! Today his covering bands include Led Zeppelin, Aerosmith, Black Sabbath, Guns'N'Roses, Journey, Metallica, Mr. Big, Whitesnake, Queen to Originals, and more.

John's presence on stage is one full of energy, and his passion for music & entertaining shines through in every performance, drawing the crowd in to enjoy the show. In addition, fans are encouraged to make requests from a song list distributed to them near the beginning of the show. Which further improves the draw for the attending audience!

In real life, John recently returned from an Asiatic Tour in China. With his return to the Second Life music scene, he brings this vast and exciting experience to share with us in a truly captivating show.

Coming up next at 3 pm SLT, Terry's Sunday Showcase continues with Marqs DeSade, who has been making music most of his life, singing, writing and performing.

A Marqs  show has a mix of original songs as well as covers, and reflects both his passion for life and sometimes quirky sense of humor.  His voice can be powerful and commanding, but also soft and vulnerable, pulling the listener into the emotion and life of the song.

Hearing Marqs is more than going to a show; it is an experience that connects the listener with the music in a unique and intimate way. Marqs has also written a book about his experiences as a songwriter, which you can purchase on Amazon here: https://amzn.to/3puyYn2