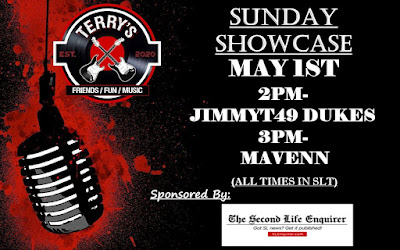 Join us on Sunday, May 1st beginning at 2 pm SLT for Terry's Sunday Showcase, sponsored by the SL Enquirer!  This week's special guest is JimmyT49 Dukes, an American musician. singer, songwriter and producer, and best known as a guitarist and singer of the Blues.

Debuting at Terry's this week, JimmyT has been performing in Second Life for over 14 years, and is an accomplished artist in real life. He brings his versatility and talent into every song. His fans can attest that JimmyT makes every song his own.

This formed the foundation for his life long love of the blues. His style includes not only R&B but also a strong rock component; and he performs both original and cover tunes.

Next up at 3 pm SLT, we keep the blues groove going as Terry's Sunday Showcase continues with a special LIVE performance from Mavenn!

The depth of her character and musical insight are on display with every song, each lyric finds Mavenn contributing her emotionally deep meaning. Her interpretations are heartfelt and true, she owns every emotion and melodic nuance, regardless of the composer.

Mavenn has a smooth voice with a touch of rasp that captivates her audience while singing covers that she completely makes her own but infuses them with her energy and charisma!!! She sings a variety of tunes but she loves the blues!

Terry's Place, is a hybrid live music venue and friendly neighborhood club where everyone knows your name! Now in its second year as well as home to some of the hottest DJs and live performers/musicians on the grid, there's a little something for everyone at Terry's when you just need to get away from it all. Dance as we spin tunes for all walks of life, show off your talents at Open Mic every Friday, or enjoy a live concert out in the park at Terry's Sunday Showcase!  With events now happening four nights a week, be yourself and escape the chains of real-life with friends, great music, and a whole lot of fun...ONLY at Terry's Place!