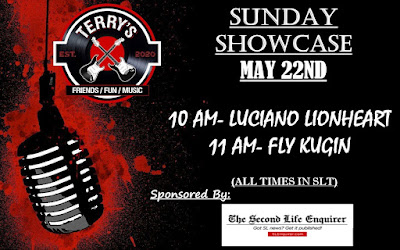 Join us on Sunday, May 22nd beginning at 10 am SLT for Terry's Sunday Showcase, sponsored by the SL Enquirer!  This week's special guest is Luciano Lionheart!

Performing his debut at Terry's this week, Luciano is a Norwegian crossover singer, known for his interpretations of musical, classical, and jazz standards. He has a famously powerful voice that stretches over four and a half octaves and has been dubbed "The Voice" by his loyal SL followers.

Luciano has also won multiple awards for his SL performances, including the very prestigious "Favorite Male Singer" award at the Avi Choice Awards 2016.

Last but certainly not least, following Luciano at 11 am SLT, Terry's Sunday Showcase continues with a special LIVE performance from none other than the lovely and talented Fly Kugin, a professional violinist that will make your toes tap and your soul sing with her amazing music.  She performs traditional improvisation &  Jazz, as well as Rock and Pop tunes  With the help of high-quality instrumental tracks, FLY adds her violin to make beautiful music.

Fly currently resides in Istanbul and teaches music when she Is not performing.  She has performed in the United States and Europe and looks forward to sharing her amazing talent with SL audiences from around the world.

So whether you looking for traditional classical violin pieces, Broadway tunes, Tango, movie soundtracks or the Scorpions, Queen, Sinatra or Leonard Cohen, Fly and her violin will make your heart soar.