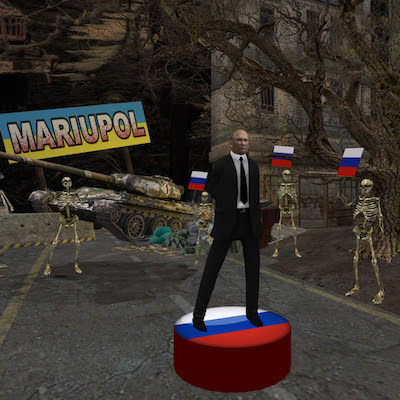 On May 9, 2022, Vladimir Putin intends to deliver a public address in Mariupol, Ukraine declaring the “liberation” of the city of Mariupol. Most of the nations and people of the world agree that Russia’s invasion of Ukraine and the destruction and loss of life that Russia has perpetrated upon the Ukrainian people is wrong in every way imaginable. Russia’s wanton aggression threatens not only the Ukrainian people but by extension, the rest of free world.

While we cannot directly alter the course of the struggle for freedom in Ukraine, we cannot sit idly by and do or say nothing.

We have created an artistic protest sim to deride and mock Vladimir Putin and his proposed speech on May 9. His assertion that Russia has liberated a city that he has essentially destroyed is ludicrous and an affront to the Ukrainian people and the residents of Mariupol.

Our protest sim depicts the Russian aggression and destruction and mocks Vladimir Putin for expecting that the Ukrainian people, and indeed the rest of the world, would celebrate and applaud him for Russia’s so called “liberation” of Mariupol.

Visit Today! Show your support for Ukraine and the cause of freedom!