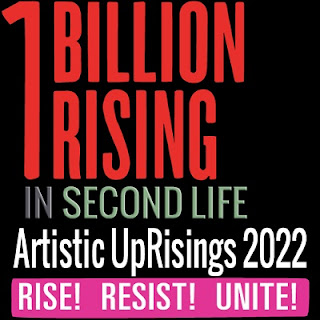 Every year for the last 10 years we have risen in Second Life. ONE BILLION RISING began as a call to action based on the staggering statistic that 1 in 3 women on the planet will be beaten or raped during her lifetime. With the world population at 7 billion, this adds up to more than ONE BILLION WOMEN AND GIRLS. Every February, we rise – in hundreds of countries across the world – to show our local communities and the world what one billion looks like and shine a light on the rampant impunity and injustice that survivors most often face.  We rise through dance to express joy and community and celebrate the fact that we have not been defeated by this violence. We rise to show we are determined to create a new kind of consciousness – one where violence will be resisted until it is unthinkable. (excerpt from www.onbillionrising.org) And we here in Second Life can be part of this global movement. One Billion Rising in Second Life is a 24-hour arts festival with the aim of raising awareness of issues of abuse to women, girls, and members of the community who identify as female, around the globe. From domestic abuse to Female Genital Mutilation, OBR aims to empower and educate as well as celebrate survival. OBR in SL will contain 4 sims dedicated to this year's theme Artistic Uprising which is a defiant call for revival, restoration, and transformation. There will be: + 24 hours of live music and DJs + Poetry and Literary Readings in the Poetry and Prose Theatre + Live Dance performances from some of the best dance troupes in SL + Beautiful Gardens and places to relax and reflect + Light and Particle Shows OBR IS NOT A FUNDRAISING EVENT, rather we are raising awareness for this tremendously important cause.