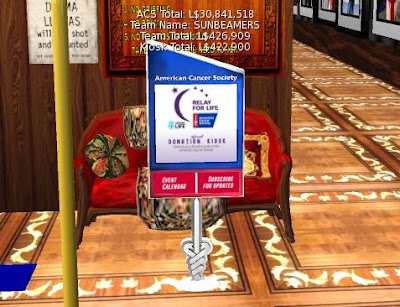 Some Relay teams are starting off the season with only a few Lindens in their totals after a few days. In the case of Team Sunbeamers, the team of the Sunweaver community in Second Life, they've been setting money aside since soon after the last season ended. Over the months, they'd collected over 400,000 Lindens in collection jars. So the team is starting off at Platinum level fundraising rank, and as of now, number four out of over 100 teams in terms of total money raised, and number two counting only inworld fundraising.

Number three is River of Life, second is "TAP - The Adult Partnership," and first is One More Light.

The "Little team that could" is off to a promising start.