SLE POLICE REPORT- WHAT APPEARED TO BE A HAIRLESS SASQUATCH SPOTTED AT HYPNOTIC ROMANCE! 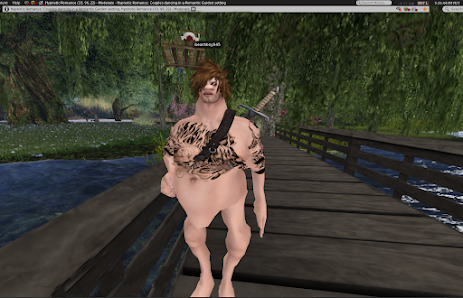 On Sunday, March 28th, 2022 at approximately 9:35 pm SLT what appeared to be an unidentified new species of hairless Sasquatch was spotted attempting to harass an innocent couple taking in the sights on a bridge at Hypnotic Romance. Startled witnesses nearby described it as a giant featherless emu ape-like crossbreed animal that moved around almost like it had a bad case of hemorrhoids.  As they watched flabbergasted and confused, the creature approach the unsuspecting couple flapping its arms wildly while twerking in some kind of mating call dance. The horrified pair stood there in shock not knowing what to do. Only equipped with what seemed to be a movie prop samurai sword, a fake chest tattoo, and wearing a visible hovering nametag  “beachboy945”, the creature looked lost and confused while continuously galloping in circles and grunting obscenely.

The gathering crowd of onlookers grew as they watched in disbelief while others sat on benches nearby eating popcorn. One witness said he has never seen something so unnatural in all his second life while another shouted the lord’s prayer believing this creature was not of this virtual world.  Karen was seen asking for a manager and dialing 911 while her husband Terry with 2 toddlers in tow whipped out his phone and dialed the SL fire department. A virtual wedding officiant was on the scene with an unidentified scantily clan female but refused to assist before covering his face with her purse and hastily walking away leaving it up to breedable animal control,  RP Hazmat, and a prostitute from the crack den.  Even a vampire clan was called to the scene but none of them could get close enough to detain the monster due to the heavy stench of Old Spice, garlic, and sour milk that permeated the air. Before it could be captured and subdued the ape-like creature scurried off into the nearby woods and escaped.

If anyone sees this creature on the loose please do not approach. This animal is believed to be male but it was hard to tell if it was a belly button or a sexual organ. It is considered armed and extremely challenged in its abilities as a griefer for its failed attempt and should be put on every ban list across the grid for the safety of all avies, breedable pets, child avies, furries, and escorts. If you manage to take a snapshot showing their nametag, please caption it and submit it to the SL Enquirer for 1000L! (Reward goes to the first 5 griefer hunters)

Got a griefer incident to report? Contact The SL Enquirer!