MCX is an interactive hud-based gaming sim on Second Life. The game is based on a player building a reputation (with the accompanying street credibility) via the completion of certain tasks commonly associated with outlaw motorcycle clubs. MCX is a very ambitious and joyous mixture of the better points of both Grand Theft Auto and the Sons Of Anarchy.

I don't really know much about motorcycle clubs, which is a nice way of saying, gangs. I drive a Volvo, drop the kids off at field hockey, that kind of stuff. "Playing SL" is pretty much as "wild" as I get these days. I haven't killed someone in like five, six years, easy.

Motorcycles are like sailing, in that I don't understand the basic A to B mechanics of it. I have no idea how one sails against the wind, and I have no idea how something that would tip over without a kickstand (or two biker legs) supporting it can suddenly be balanced simply by going 85 mph on it. I also have that European thing going on, even when I am an animated avatar, where I look less like Jax and more like Rommel when I wear black leather. It's an unintentional and unavoidable faux pas, and while bikers most likely don't give a damn about hurting someone's feelings, they probably prefer to do so on purpose. Guys who take a lot of shit, even tough guys, kind of like to know when it's coming. 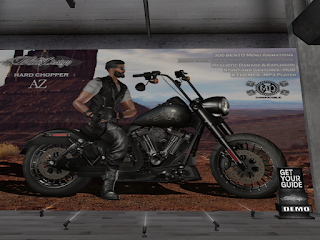 All you need to do is show up at MCX, get your free hud and start your crime spree! Your hud has all the buttons you need to start an import/export career in Little Pharma and is also a good way to get to your different weapons quickly. It has a scanner, so you can locate both friend and foe. You can use it to launch missions, recover from missions, recruit people for future missions... all that good stuff.

If you have some familiarity with the GTA modus operandi, as well as a knowledge of motorcycle clubs greater than Easy Rider but not as complex as Sons Of Anarchy... you're good to go. You can even ride around like The Searcher and just crash into things. I kind of wanted to do that Kobe Bryant thing where I flip (I was a cheerleader for a while, and I flip really well) over a speeding, approaching motorcycle, but I was afraid to ask a biker to try to run me over. There might be a dozen mouthy journalists buried in the hills behind the MCX mall. 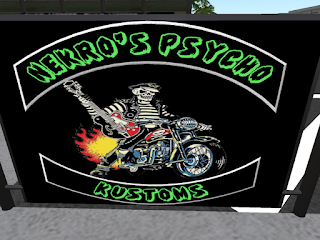 MCX has a motorcycle mall where a beginner or an expert can get themselves astride a chopper. They seem to have about 40-100 different kinds of motorcycles. You can make a day out of just going through these bikes. They have ad boards where you can get a notecard with detailed specifications, and I'd recommend going through those specifications well. It's like buying a dog, in that you want to match the right dog with the right owner and the right bike with the right biker. The main difference is that bikers won't beat you up if you have a border collie instead of a schnauzer, but they will beat you up if you show up on a moped or something similarly wimpy/corny. I didn't see any Rice Burners at the mall, but I didn't look that hard, either.

They don't have any pretty pastel pink motorcycles for yuppie girls. Biker girls tend to be as tough as the guys are, and they ride big black choppers just like the guys do. I'd imagine that you'd get a chain-whipping if you showed up at a serious, drug-smuggling MC on a lavender bike with little butterfly stickers on it. Motorcycle people are fun, love to party, get along like brothers... but the behavioral line between what gets an outsider a mean look or an aggravated assault from bikers are often indistinguishable.

Kicking ass is an important part of being a biker, and not everyone is cut out for it. To quote Hell's Angels author Hunter Thompson, “There is an important difference between the words 'loser' and 'outlaw.' One is passive and the other is active, and the main reason the Hell's Angels are such good copy is that they are acting out the daydreams of millions of losers who don't wear any defiant insignia and who don't know how to be outlaws. The streets of every city are thronged with men who would pay all the money they could get their hands on to be transformed-even for a day-into hairy, hard-fisted brutes who walk over cops, extort free drinks from terrified bartenders, and thunder out of town on big motorcycles after raping the banker's daughter."

I didn't find the gun-selling part of the sim, but much firepower is available on the MCX website. You could keep the Russians out of Kyiv with the arsenal I saw advertised there. I'm pretty sure they have that gun Tony Montana was shooting at the end of Scarface. You'll be a well-respected man about town if you shop here enough. I spent a month's pay there. I bought seven Mack-11s, about eight .38s, nine TEC-9s, ten Mack 10s, the list never ends. U Can't Touch my riches, even if you had MC Hammer and those .357 witches. 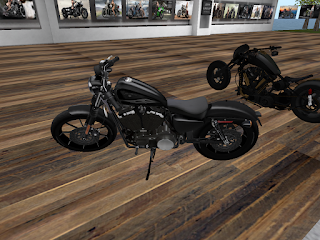 Collecting bounties is a facet of this game not seen on many SL activities. At the moment, the game is new, and doesn't offer enough bounties for a woman to retire from, say, her SL Enquirer sportswriter job and start killing bikers for a living. However, if MCX gets popular- and I have every reason to think that it will- that may change. In case you've never looked into having someone killed on SL, killing a chump-type biker is worth 90 Ls. I'd imagine that killing off someone like Vito Corleone might cost a bit more. I already have a few SL jobs, but it's nice to know that, should it ever come to it, I can make an Eastwood-type living killing people with bounties on them. My money will have blood on it, but all money has blood on it. Sure, it's murder, but they're probably real jerks anyhow, and they had it coming. We've all got it coming, I suppose.

You can see who has a Bounty on them by checking the Stats page on the MCX website. They also keep score somehow, and you can see where both individuals and clubs stack up once the blood starts spilling. This, I'd gather, is the manifestation of your Respect score, which is like currency in the gang world. If your MC isn't listed in these rankings... well, you might as well ride a BMX or something.

They also have Beacons, which lead to other motorcycle / MCX friendly sims. This is important, as biker shootouts work better at biker sims than they do at the Maitreya main store or the Newbie hub. I'd assume that one would use the Beacon to get to the sim, then use the Hud to find and eliminate your enemies- who almost always need finding and eliminating. MCX has you covered pretty much from start to finish there.

There are two kinds of video games, and if you're looking to run Super Mario and hit coins with your head, God bless you. I'd rather introduce crack cocaine into a formerly bucolic suburban community. If you're cut from that same cloth, MCX is for you. Set in a moral vacuum, it's drug-dealing, snitch-killing fun for the whole family! If your family is the Gambino family, perhaps... 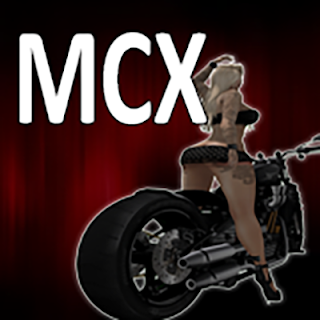