War is very unpleasant to think about, and many would view SL as a means of temporary escape. One can't actually do anything about those tanks, but one can get away from it for a while on SL. In a broad sense, it is sort of what SL is for.

The world watched in outrage as Russian armies attacked the Ukraine. It is a horrible thing to watch, and it has catastrophic potential implications if other players become involved. You'd think "worldwide plague" would be enough, but we just upped the ante. Russians have reasons for acting as they do, and "obscure SL sportswriter column" is most likely not where those reasons need to be debated.

Russia's invasion of the Ukraine is not fun stuff to play out at a sim. I'd greatly question the integrity of someone who made a first-person shooter Russia vs the Ukraine war game sim... right after I played it for a few hours, of course. Just kidding, I don't think I could perform the moral gymnastics needed to play something for laughs as people are dying for real in the Ukraine. I do some hardcore RP too, so my bar is pretty high, and my refusal to war-game the Ukraine horror is thusly notable. 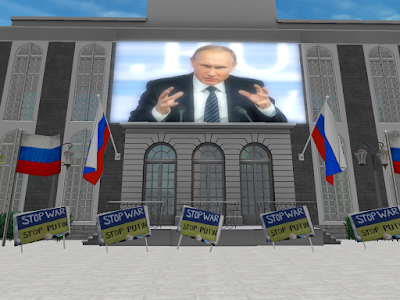 STOP WAR is a sim which just went into effect last Friday. It is not a grand sim in any design way, it is in fact very simple. There are a few pictures, a chart showing NATO countries, a dispenser where you can get a free Ukraine flag and a game table. Nothing there that will stop a war, and at this point it is important to remember that wars aren't going to be stopped by video games, and in fact often resemble video games when you see someone guiding in a missile and so forth.

Pela, who runs the STIP WAR sim, is no fool, and her sim title is more Idealistic than an aspect of a mission statement. I spoke with her a while while visiting her sim in the early US morning. She put the sim up Friday, and will leave it up as long as it is active and stays relatively positive.

Pela recognizes that, in times of war, people get traumatized, or even just upset, or even just intrigued. They need somewhere to go where they can discuss it. It may not be polite to take over someone's nightclub and turn it into a NATO discussion format. However, at STOP WAR, you can chat about the war all you like. 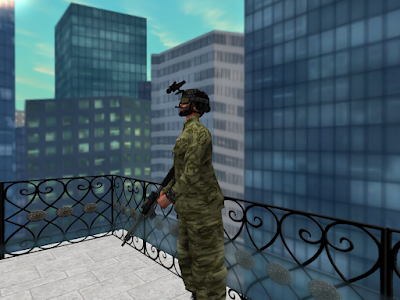 Human nature being what it is, people sometimes choose Battle over Reason. However, there are places for both, and this sim falls into the camp of the latter. Anyone getting too close to the former will be asked to leave. This sim is meant to allow people to seek some comfort.

They are getting some good traffic for a sim that started Friday, so there is definitely interest in the topic among those who play the Linden way. Pela is running the sim for all the right reasons, and hopefully good beats evil. Pela told me that some Russian themed sims were having some problems with people arguing, and hopefully that doesn't go down at STOP WAR. 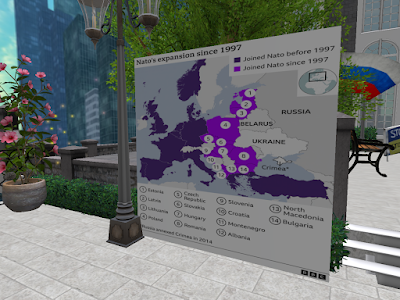 I got some Ukraine gear from the SL Marketplace, not the STOP WAR sim. Pela- who seems pretty nice, and dresses cooler than I do- isn't running that sim to make a profit, and the only gear they had there was a free flag. I may wear my Ukraine outfit at my dancer job, although it might cost me Russian tips. I've had no luck finding Belarus gear. I do have a USSR gymnast leotard, which I saw at a store and I thought looked cool. I can switch between outfits from different nations, depending on the political affiliations of my customers. I never imagined that I'd have to think geopolitically when I accepted the dancer job at the wrestling sim, but that's how things shake out sometime. 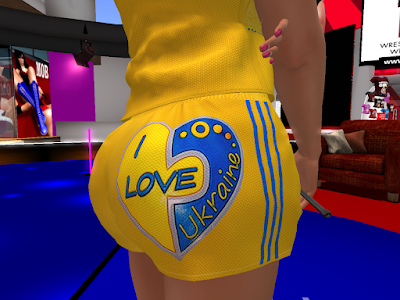 Yes, that's my ass in that picture. Never let it be said that Stacey Cardalines shirks from the horrors of war. Spasibo.