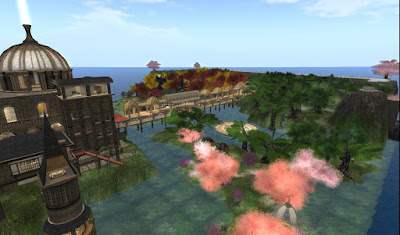 Some sad news. After fourteen years in operation, The Tempura Island sim is closing. The announcement was given in the sim's group.

After such a long journey of 14 years traveling together in Second life, we made hard decision to close TEMPURA sim.

When opening TEMPURA we could never imagined that will last for so long time. TEMPURA touched so many hearts and bring amazing memories to everyone and for that we are deeply glad.

With humbleness and huge grateful we Thank you, to each of you who ever admired, loved and healed,
at TEMPURA.

Tempura is a SIM of love! We say Bye to you, but it's a Welcoming of a new beginning.

May Buddha full your hearts with love and happiness!

Dropping by, I found the area quite picturesque. While it is Japanese-owned, not everything is Japanese-themed. Tempura's largest structure is the palace in the north, which has a large dance ballroom, and a number of places and private rooms for couples. The south had a wooded area, partially green and partially autumn red and orange. In between was a circle of meditation pillows and a tai-chi practice area, both of which were being used when I dropped by at close to midnight SL time. There's plenty to explore, including a few hidden areas.

The sim does have a blog, http://japan-tempura.blogspot.com/, which has a description at the beginning of how things got started in 2008.

No date has been given for the sim's closing.