It’s time to highlight another week of storytelling in Voice by the staff and volunteers at the Seanchai Library. As always, all times SLT, and events are held at the Library’s home in Nowhereville, unless otherwise indicated. Note that the schedule below may be subject to change during the week, please refer to the Seanchai Library website for the latest information through the week. 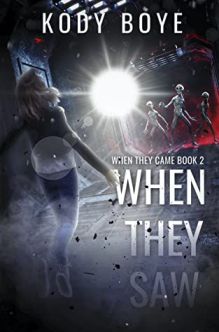 Having graduated from the juvenile education system, Ana Mia decides to join her sister as a part of Fort Hope’s Midnight Guard. Fort Hope is a stronghold, protecting its inhabitants from Earth’s alien invaders; and the Midnight Guard forms the eyes, ears and guardians of the stronghold’s Wall.

Without the Guard and without the Wall of the stronghold, the aliens would be free to harvest humanity, using their ships and the Coyotes who form their eyes and ears in opposition to the Midnight Guard.

But now things have changed. Now Ana is something more, as she notes herself:

I never expected to be abducted. But here I am, standing onboard Their ship, facing Them down for the first time in my life, seeing the true face of the Earth’s invaders from another world.

My task is simple: to act as Earth’s emissary and negotiate peace. But it is far more complicated than it seems. I know nothing of politics, and even little of persuasion, but I have no choice. I must do this to keep my friends, and my world, safe. I cannot afford to fail humanity.

Join Gyro Muggins as he reads the second volume of Kody Boye’s When They… saga.

With music, and poetry in Ceiluradh Glen.

Caledonia Skytower reads the fifth of Salman Rushdie’s major publications and his first since The Satanic Verses.

Written for the younger reader, but with plenty with it suited to older ears, it is of an allegorical nature and addresses a number of societal problems, particularly those found in the Indian subcontinent.

Dedicated to Rushdie’s son, the book looks at the issues it raises – including that of censorship (unsurprisingly, given the reaction following the publication of The Satanic Verses in 1988) – through the eyes of Haroun Khalifa, the son of a doctor and master storyteller.

Both father and son are struck by afflictions related to Haroun’s mother deserting them; Haroun has a form of attention-deficit disorder, whilst his father is prone to bouts of depression. Both can only be relieved of their afflictions should Haroun’s mother, Soraya, return.

Before then, however, Haroun is set for an adventure and discovery.