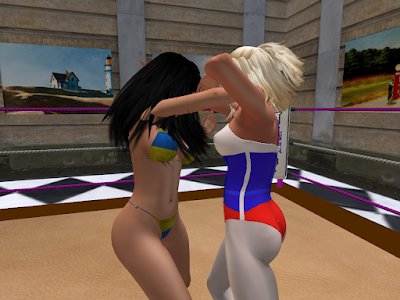 "You can't do that, it is an act of depravity!"

You are a fly on the wall at a meeting of Show Managers for Divas Wrestling sim. In the interest of full disclosure, this reporter is a "Spokesmodel" at this sim. One of the managers, who may be a Spokesmodel with a newspaper job on the side, is proposing a particularly brutal main event for one of the Divas shows. Before we go further, we must explain a few things about wrestling on SL.

There are two kinds of SL wrestling. One is done with a hud, and is a sport/game. Two wrestlers use a hud to have an actual competition against each other. The Virtual Wrestling Alliance, who advertise with this paper, are this sort of league. While they may use some sort of plot contrivance, they are selling the sport more than the spectacle. I do not know if the wrestlers are paid by the league, paid by tips from the audience at shows, or not paid at all.

The other sort of wrestling is poseball wrestling, which is more of a Performance Art. The matches, while not fixed, are contrived, and the opponents cooperate rather than compete. There is a heavy emphasis on personality, conflict, good/bad girls and just making a scene. The wrestlers live off the tip money from the crowd, so whatever they do to draw attention to themselves is fair game. Divas Wrestling is this sort of wrestling.

Pro Wrestling in general is a sketchy business. Her roots lay in barnstorming carnival shows, the anything-that-draws-attention motif was in full effect as far back as when Grover Cleveland was the President and elements of it stretch back to the Dark Ages. When your show is two people fighting, you don't really need to waste as much money/time/effort on developing scripts or hiring gifted writers. You can be very ham-handed with the presentation. 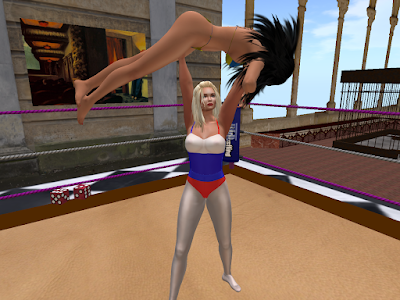 Thusly, wrestling tends to have broad, easily understood storylines. The dastardly Mean Girl is fighting the adorable All American girl, stuff like that. Wrestlers can be cowboys, European royalty, cheerleaders, bikers, musclemen, axe murderers, surfers, college boys, cannibals, karate guys, etc... pretty much anything that can be painted with a broad stroke and understood by children.

One easy way to perform this task is the Ripped From The Headlines motif, where your storyline reflects some current news event. This motif is good because FOX or CNN or NBC News do the backstory for you, all you need to do after is provide the militia guy or the evil comic book heroine ripoff and your story pretty much writes itself.

With that in mind, it was almost inevitable that, at some point in 2022, this (see below) meeting among wrestling show producers was going to happen:

"We need a main event that gets people riled up."

"It's ripped from the headlines."

"We get a Russian girl and a Ukrainian girl to fight."

"You can't do that, it is an act of depravity."

"Thousands of people are dying over there, we can't make light of it."

"The crowd will love it."

"Where would you even FIND a girl from Russia or the Ukraine?"

"I have a Ukraine t-shirt and shorts."

"Where do you plan to get the Russian?"

"My friend Courtney, she does some model work for me with the SL Enquirer."

"She's from the Ukraine?"

"We'll get her a Soviet Union gymnast outfit I saw at a store."

"The idea that someone might be offended by this never popped into your head."

"I have a filter which blocks things like that."

"This idea has been terminated with extreme prejudice." 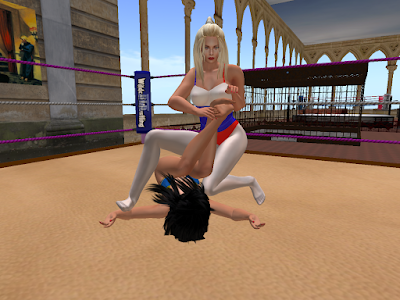 The road to the castle gates is not always the high road, and one has to step on a lot of nice people as they claw their way to the top. The person proposing the fight wasn't a monster. She was just ahead of the curve.