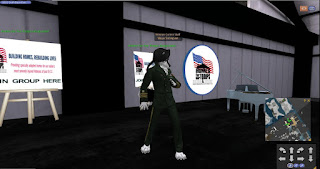 Sunday February 27 was when Veterans Isle held it's monthly benefit music concert. There were four one-hour performances by live musicians, and one DJ, at the five hour event. The benefit, organized in part by Frets Nirvana, was to raise money for Homes For Our Troops.

Good evening all!  We are conducting our Homes For Our Troops benefit tonight and we have quite a lineup…Check it out:

Come on out and help us reach a target of 150k Linden tonight.  Look at the world folks ….and remember what our extremely injured vets have sacrificed!

Until recently, the monthly concert was at a stage at ground level. But more recently, they have been at the USMVC Events Hangar, well above the sim. Taking a peek early in the show, there were about fifteen in the audience. But later on, the crowd had swelled to over two dozen. As the performers played their music, people donated money to two house-shaped kiosks on either side of the stage. 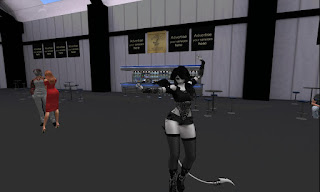 By the end of the show, a total of 188,955 Linden dollars had been collected. Last month, the January concert and other kiosks in other sims collected a total of $855 US.

To learn more about Homes for Our Troops visit https://www.hfotusa.org

"Thank you to all  who helped kick off 2022’s effort for Homes For Our Troops."