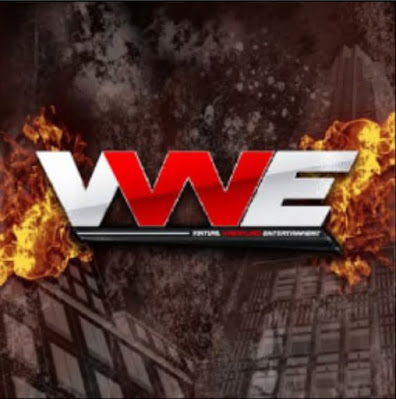 It all started as I was chillaxing at one of my favorite Nightclubs in SL on a Friday night.  I was sitting at the bar, tossing back a cold one, and admiring a group of cheerleaders that had just walked into the bustling place, when I felt a tap on my shoulder and a sultry voice said “You’re Josh, that writer fella, ain’t ya?”

“Who wants ta know?” I answered over the din of the juke box, as I turned around.

“I got a story for ya.  A story that NEEDS to be told.  The world needs to know, and I want you to write it”.

The gorgeous brunette who had disturbed my reverie stood there.  Nattily attired, she was wearing a belt with a large buckle…the kind wrestlers wear on television. She slipped me a piece of paper with a SURL on it and said  “Be at this address in 90 minutes”.

And then, just as mysteriously as she appeared, she slipped back into the crowd and was lost from view.

I headed off at the appointed time and found myself standing outside a sports arena with a big “VWE” written in flaming letters above the door. Swept along by the crowd, I entered the arena just in time to hear a tuxedo-dressed announcer say “Let’s get ready to Rumbllllllle”

And thus began one of the most fascinating, entertaining, and engaging evenings of my life!  I had arrived at the Gold of City, Friday Night Smackdown.  Over the next 90 minutes I was amazed by the wrestling spectacle before me.  The crowd cheered and boo’d the various competitors, as they clawed and scrambled for leverage both inside and occasionally outside the center ring.  Running commentary provided by a crew of three announcers adding further color to the proceedings.  Men and women entered the ring at various points in the evening, and at the end of each bout, one would be carried out by friends or stretcher, and other danced around the ring, hands raised high in a victor’s salute, having just vanquished a would-be competitor.

Following the final bout, as the lights came up, the arena became a beehive of activity. Some guests headed for the doors and back into the parking lot.  Others climbed into the ring that had only minutes before been a scene of intense conflict and transformed it into a dance floor of sinuous, writhing dancers.  The competitors came back out and mingled freely with the fans.

I approached the mysterious brunette from the bar, Viola Beaumont, and asked if I might have a word with her.  She agreed, and along with a couple of others, we sat down for an interview. 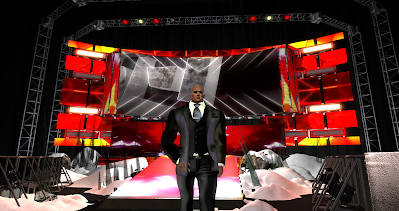 Josh (Thomas1 Bellic) (JB):    So, tell me.  When and how did you all first become interested in Virtual World Wrestling?

Viola Beaumont (VB): I first got involved in Virtual Wrestling in 2015 when a now long-gone Federation in NMW recruited me. It was the start of 2016 however when I made my debut in VWE and this has been my home since.

Michael Karsin (MK): I started back in 2011 in a company called HKWF. I Then moved on to XWA which ultimately rebranded to VWE. I got into SecondLife to do boxing, but shortly after I logged into the grid, my brother found wrestling. That's where I ended up putting all of my focus. 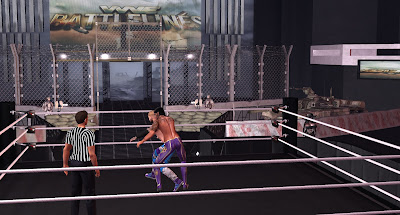 JB:  What a fun Build here.  How did you happen upon this theme?

MK: Thanks! The idea behind our theme was to make something a bit more urban and not too overwhelming so that the focus would be on wrestling. We decided on a small seating area for the fans and a subterranean hallway system for our staff.

JB:  Any connection between your décor here and the RL conflict in the world today?

VB: We plan our shows far in advance, and the setup takes many weeks of work. There is no connection to what has unfortunately transpired.. and we hope that conflict ends soon.

JB:  Describe for us what an evening at the arena is like for guests.  What can they expect?

MK: What our guests can look forward to is an entertaining and interactive event packed with solid wrestling matches. We love to tell stories that make you get invested. You can cheer for your favorite wrestler and tell off those that you don't like. At the end of the night, everybody is playing an exaggerated character. We are all very nice, and we love to greet the fans after the show. 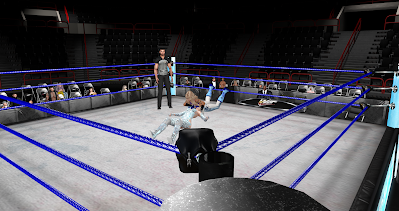 JB:  I understand, Viola, you are the top Female Wrestler at VWE.  What does it take to climb to the top of the heap in this sport?

VB: Constant practice, constant studying. Learned from those that came before me, while also being able to apply my own unique mark on Virtual Wrestling. Having an open mind and being willing to accept criticism, not to mention having myself being my own biggest critic.

JB:  How big a staff does it take to run an operation like this?

MK: It can take anywhere from 5-10 individuals to run the show. That includes our media, pyro, and lighting systems, as well as the bookers who put the show together. Certain shows do take more resources as we hold large-scale staple shows every couple of months.

JB:  I see other related storefronts in the area with the VWE Logo attached.  What other businesses are connected to VWE here?

MK: VWE is helped by F!GHT Sporting Goods which is owned by Michael Karsin (hoyce.fang) which is where most of our creations originate from, other than that VWE is a self-sustaining company.

JB:  Do you use the arena for other activities as well?  Dances?  Cattle Auctions?  Dramatic presentations? Anything?

MK: As of right now, we don't use our venue to host other events. But it is something that has been discussed and could be considered in the future. 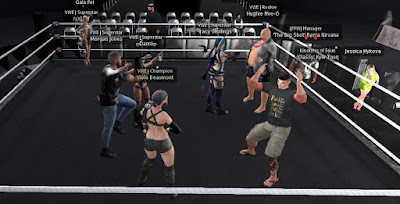 JB:  In RL Wrestling, most people think the matches are all "fixed"  and the winner is usually the one with the most elaborate costume. So, your secret is safe with me (and our 70,000 viewers each month)....Are the results of VWE Matches "pre-determined"?

MK: So yes, the premise is very similar. We make sure our wrestlers have the proper preparation they need in order to put on an entertaining event. Everything else is our little secret!

JB:  How can people find out what events are upcoming?

VB: We have a fan group in world as well as a Discord server where we are happy to invite those who wish to join for information on our events.

VB: Absolutely! Come to City of Gold, some Friday evening and have a great time with the rest of us. And who knows, if you like what you see, maybe you can stand across the ring from me or Michael Karsin someday ---  if you are brave enough! 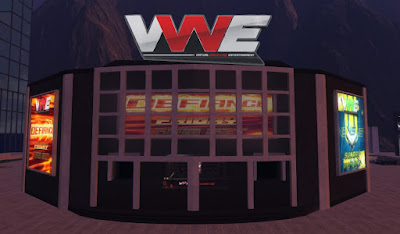 So, there you have it folks.  Are you getting maybe just a little tired of the “Club Scene” on Friday nights?  Learning who is now dating whom?  Who are on this week’s list of Cool people, and who are not?  Break out of that rat race. Guys – take your Gal.  With all that testosterone on display, she can’t help but wanna snuggle up next to you as you enjoy the Show.  And Ladies….What guy wouldn’t LOVE to see a hair pulling, screaming cat fight in the center ring as ladies duke it out for the chance to wear the Champion’s Belt?  Guaranteed entertainment and fun for the whole family. For a change of pace, hop on over to City of Gold for a truly entertaining way to spend your Friday night, alone, with a buddy, or with that truly special someone. You won’t want to miss this!